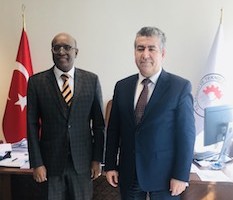 The ambassador of Djibouti to Ankara (Turkey), Aden Houssein Abdillahi, was received yesterday in audience by the Turkish Deputy Minister of Industry and Technology, Çetin Ali Dönmez. During the meeting, our ambassador in Ankara gave an update on the state of cooperation relations between the two countries, highlighting the dynamism that characterizes their privileged partnership.

Mr. Aden Houssein Abdillahi spoke of the government's strategy for the development of small and medium-sized enterprises, with the aim of creating a new space to promote a private sector firmly focused on small industrial units. Several topics of common interest were reviewed by both parties. These include the establishment of a Memorandum of Understanding with the Ministry of Industry to support SMEs in Djibouti. In this regard, the Djiboutian diplomat asked Turkish cooperation to support the establishment of a partnership to strengthen SMEs and Technopark. In short, the Djiboutian diplomat and the Turkish Deputy Minister of Industry reiterated the commitment of the authorities of both countries to work continuously for the strengthening of bilateral relations.